“Hope for Architecture” is the calling of Clay Chapman and described by him as “a building initiative to address the challenges of an uncertain future.” In truth, “Hope for Architecture” is a masonry and timber technology, reinvented and adapted from antiquity for this moment. Clay and his young family moved to Carleton Landing, Oklahoma fifteen years ago to fulfill a mission: creating a community and explore that technology. 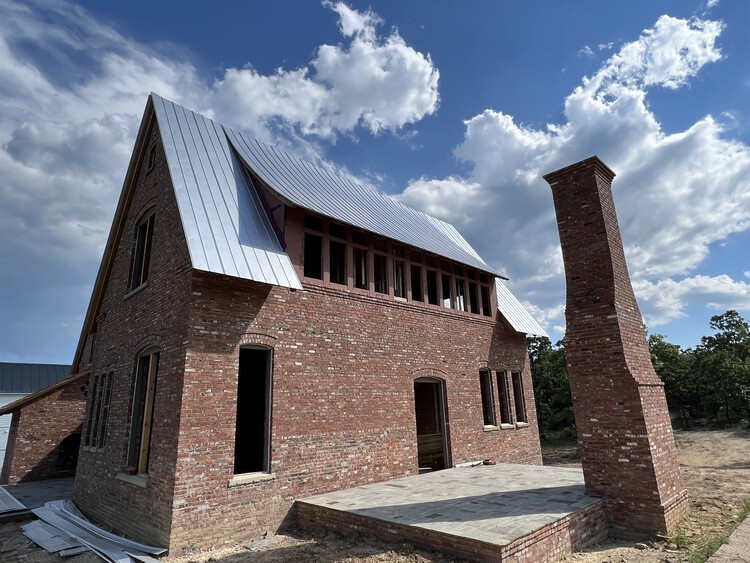 Chapman describes his mission: “The initiative launched in 2012. We began with a singular goal: to establish a lasting alternative to disposable building, that is both viable to build and affordable to buy. After a field test in Columbus, Georgia, and a joint thermal mass study with Clemson University’s National Brick Research Center. We’ve also collaborated with Notre Dame, providing internships and workshops to School of Architecture students.”

Chapman describes the basis of his technology as “inserting a mass wall envelope” into the way buildings are conceived – using “High Agency massing” where a structure is “reduced to its masonry superstructure repeatedly”. This “High Agency” technology uses “triple wythe, common bond, structural, load bearing, clay brick masonry. Repurposed bricks are slightly larger…In design, it’s all based on a 4” modulus.” Rather than using computer models, Chapman has found that there are “inevitable moments of problem solving and improvisation at 100% scale.”

The creation of mass is followed by conventional concerns – “Low Agency” outfitting, essentially “everything resting upon, the massing…Nothing is embedded within the walls laterally or vertically. Penetrations pass thru perpendicularly. More often than not these passages are cored, cut in and or drilled out after the fact. Conduit is attached to the walls unapologetically.”

The work has been awarded the Barranco Award and the Urban Guild’s Excellence in Exploration Award and multiple awards for his buildings from the National Brick Industry Association.

Beyond the obvious long-term economies and resiliency, there are basic conservation of energy realities, the buildings perform substantially better than code requires. Chapman notes “The walls are 12” thick. Let your instincts do the work. In terms of standard “nrg” modeling our technology performs substantially better than code requires. Standard “nrg” modeling is geared for R, and there’s no incentive for industry to come up with a U version that’s actually accurate.”

In this fresh look at the timeless, Chapman simply states “Modernity would have us believe the thousands of years of construction prior to the industrial revolution yielded no best practices appropriate to the needs of people today. I vehemently disagree. Obviously. While progress has improved our lives tremendously, nothing has proven to do a better job than massive masonry when it comes to lifecycle, stewardship of resources, ancestral connection, resilience, and honesty. What we build is constructed specifically for cost effective renovation, and in such a way as to prevent the masonry from being damaged in that process.”

“A building that has the potential to last five to ten times longer than the typical new construction shelf life becomes exceedingly less expensive for both the economy and the environment over time. ‘Dilution’ is the optimal word, whether we’re talking about price per sq ft or price per carbon ft. In terms of long-term cost, nothing is cheaper”

Technology can be a blind agent of change, or it can reflect and impart values. It is clear Chapman’s life work reflects a response: “We are in a state of multifaceted cultural cannibalism…rooted in the ugliness of the places we’ve created.”

“New” is not innovation, it’s just what is happening now. Technology can change everything but our humanity. We can be dazzled by what we discover, but we are nurtured by what we value. As Clay Chapman says, “This goes for any innovation, whether Tesla or Legacy Architecture.”

This article is part of the ArchDaily Topics: The Future of Construction Materials. Every month we explore a topic in-depth through articles, interviews, news, and projects. Learn more about our ArchDaily topics. As always, at ArchDaily we welcome the contributions of our readers; if you want to submit an article or project, contact us.