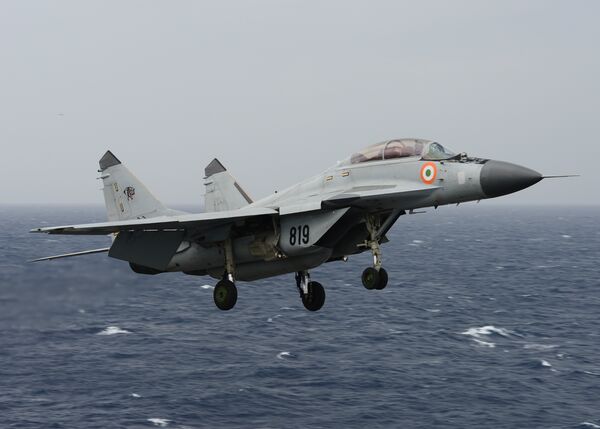 HAL is testing a new mission computer for the Indian Navy’s MiG-29K carrier-borne fighter aircraft. The new system has been designed to give the navy the ability to integrate a wide range of domestic and international air-launched weapons with the MiG-29K. (US Navy)

The Indian Navy is test-flying a new mission computer for its Mikoyan-Gurevich MiG-29K/KUB carrier-borne fighter aircraft.

The mission computer has been developed by the state-owned defence company, Hindustan Aeronautics Limited (HAL). The new system is intended to give the navy the flexibility to integrate domestically developed and western-origin, air-launched weapons with the Soviet-era MiG-29K, HAL told
Janes
.

An industry source familiar with the project told
Janes
that the programme was launched in January 2021 after Russia declined to upgrade the mission computer or provide the source code to HAL.

The former Chairman and Managing Director of HAL, R Madhavan, said in a statement that the MiG-29K/KUB is limited to carrying Russian-origin weapons on air-to-air and air-to-surface missions.

“The aircraft cannot be operated with non-Russian-origin weapons without extensive modifications,” Madhavan said. “Integration of indigenous weapons or western-origin weapons with the MiG-29 is challenging because we do not have any design data or documentation on the architecture of the system.”

HAL told
Janes
that the Indian Navy assesses that

the MiG-29K’s inability to mount domestic weaponry is a “serious limitation”.

Janes
has learnt that the flight computer has been in trials with the navy since June 2022. “The trials are currently ongoing. The system is being tested along various parameters,” HAL said.

“We estimate that the trials may take between six to eight months to be concluded,” an industry source added.


Already a Janes subscriber? Read the full article via the

Request a free consultation to discover how Janes can provide you with assured, interconnected open-source intelligence.

Ask Kurt: Can I depart my laptop or computer in rest manner, or really should I shut it down?